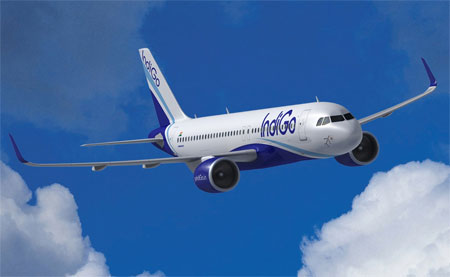 A friend of mine travelled last week from Bangalore to Dubai on IndiGo Airlines. She said it was low cost, with seats that would lean back giving a feeling of more space, along with great customer service. She travelled coach class and yet was addressed by name by the flight attendant.

IndiGo placed its first order of 100 aircraft with Airbus to start its business as a domestic airline in India. The size of this order ensured low operating costs, full maintenance support from airbus and the latest aircraft technology and comfort. In 2005, when other low-cost carriers were working with older, leased aircraft and battling a reputation for inferior service, Indigo inked a deal to buy 100 new A-320 jets from Airbus, purchasing at volume to ensure a lower price and a partnership-type commitment on maintenance. IndiGo’s investment in the training of its staff and its [aircraft] fleet killed whatever difference might have existed between a low-cost carrier and a full-service carrier by offering equivalent service. By 2011 Indigo had neatly 20% of the rapidly growing Indian domestic market. In September 2011 it introduced its first international flight to Dubai.

Indigo turned regular business travelers into loyal customers because it never acted like a budget airline. From the beginning, its purchase of all new aircraft helped it avoid maintenance problems, and superior planning helped it to match or exceed the on-time performance record of its full-service competitors — even though rapid turnaround of its planes was the key to the company making money.

But it also went beyond the basics to reinvent the first-time flyer segment. When Air Deccan, acquired by Kingfisher in December 2007, was struggling to fight the impression that their planes operated like public buses with wings, IndiGo pushed best practices even when there was no compelling reason to do so. In a country where other carriers shared passenger-stair vehicles and the top airline still had to have disabled passengers carried up the staircase to plane height by ground crew, for instance, Indigo brought in larger, handicapped accessible passenger ramps from day one.

Similarly, the company equipped check-in staff with hand-held scanners that allowed passengers without baggage to avoid the dreaded scrum at the counter. And at least in the beginning, flight attendants manning the beverage carts addressed even lowly economy class passengers by name (with the aid of the seating chart).

The strategy paid off: Since 2008, when the company booked its first profit even as high fuel prices and the economic downturn ravaged its competitors, IndiGo’s net income has grown more than five times — from a shade under $20 million to more than $120 million.

IndiGo President Aditya Ghosh says India is a hugely under-penetrated market. We have just one commercial aircraft for 1.9 million people. The United States has one plane for every 50,000 people.”

The airline, which earlier ran role specific training programmes like any other airline, decided to merge training into one central operation with three segments: one, functional skills training aimed at specific roles like that of pilots, in-flight crew, ticketing attendants, baggage handling, among others.

The next segment was coaching for customer service and soft skills.

The last came leadership training at all levels.

This last segment of training, designed to encourage all employees to take ownership of customer issues, Ghosh insists, has really helped the airline develop a strong loyal customer base.

Do you have the right skills sets in your organization to drive high value at low cost?